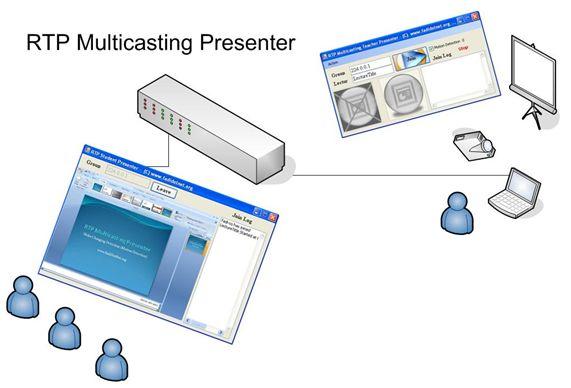 In this article, I will describe the architecture of RTP – Real Time Transport Protocol, and discuss the RTP managed classes for the Microsoft Conference XP Project to multicast JPEG images.

The key standard for data audio/video transport in IP networks is the Real-time Transport Protocol (RTP), along with its associated profiles and payload formats. RTP aims to provide services useful for the transport of real-time media, such as audio and video, over IP networks. These services include timing recovery, loss detection and correction, payload and source identification, reception quality feedback, media synchronization, and membership management. RTP was originally designed for use in multicast conferences, using the lightweight sessions model. Since that time, it has proven useful for a range of other applications: in H.323 video conferencing, webcasting, and TV distribution; and in both wired and cellular telephony. The protocol has been demonstrated to scale from point-to-point use to multicast sessions with thousands of users.

How does RTP work?

A sender is responsible for capturing and transforming audiovisual data for transmission, as well as for generating RTP packets. It may also participate in error correction and congestion control by adapting the transmitted media stream in response to receiver feedback. The frames will be loaded into RTP packets, ready for sending. If frames are large, they may be fragmented into several RTP packets; if they are small, several frames may be bundled into a single RTP packet. Depending on the error correction scheme in use, a channel coder may be used to generate error correction packets or to reorder packets before transmission. After the RTP packets have been sent, the buffered media data corresponding to those packets is eventually freed. The sender must not discard data that might be needed for error correction or for the encoding process. This requirement may mean that the sender must buffer data for some time after the corresponding packets have been sent, depending on the codec and error correction scheme used. The sender is responsible for generating periodic status reports for the media streams it is generating, including those required for lip synchronization. It also receives reception quality feedback from other participants, and may use that information to adapt its transmission. A receiver is responsible for collecting RTP packets from the network, correcting any losses, recovering the timing, decompressing the media, and presenting the result to the user. It also sends reception quality feedback, allowing the sender to adapt the transmission to the receiver, and it maintains a database of participants in the session. A possible block diagram for the receiving process is shown in the figure below; implementations sometimes perform the operations in a different order depending on their needs.

In my next article, I will provide more info about the RTP architecture to transmit audio and video. For more information about RTP, see the following link:

These steps will give you a brief of how to use the RTP on your multicasting projects: